I love this place.  Except for one trip on the sub-way I've walked everywhere I've gone.
Things are compact and plentiful and there's a lot going on downtown.  Plenty of parks and historical places.

The people are nice and friendly, the cops walk the street and aren't dressed like their going to war.  The homeless problem here is more apparent than in Indy but nowhere as bad as L.A. where you couldn't walk a whole block without encountering 2 to 3 panhandlers.  Most of whom were better dressed than me.

The streets are almost always buzzing.  Lots of people, its like downtown Indy at lunch time but people are wall to wall. 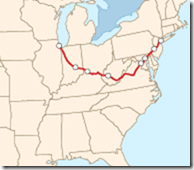 There's almost a whole different world underneath the streets and in the larger buildings.  Food courts and shops line the sub-ways and there are 'mini-Circle City Malls' everywhere. Its like the city itself is the second floor.

The architecture is fabulous, the old and new.  They have a big thing for statues and sculpture and some of the new stuff is pretty weird.  There's a giant clothespin at one of the subway station entrances that no one here can explain but their sure there's a reason for it, they just can't remember it.

The Municipal Plaza has a cool layout with giant game pieces all over the place.  Chess, Parcheesi, Bingo and Dominoes pieces everywhere.

The old City Hall is massive and beautiful.  Where our state capitol has the 'dome' this building has an open court.

Benjamin Franklins home was located behind a building that he owned and rented out five apartments.  His home is gone now but there is a museum on its site and the apartment house now houses a museum and a working Post Office, the B. Free Franklin Post Office. If you ever visit Philly go to the B. Free Franklin Post Office. and take a stamped postcard or envelope with you and they will give it a special cancellation. The Museum is within walking distance of Franklin's grave, Independence Hall, the Liberty Bell and the Constitution Center.

When William Penn laid out the plans for the city in 1692 there were 5 squares for communal and open space purposes.  The Central Square is were the City Hall now stands.

Washington Square served as a burial ground for thousands of soldiers and fever victims. The Tomb of the Unknown Soldier (Revolutionary War) and Statue of George Washington  is there.

"Proclaim Liberty throughout all the Land unto all the inhabitants thereof"
Inscription on the Liberty Bell, from Leviticus XXV, v10.

Site seeing was limited to viewing the external sites because the Convention schedule conflicted with the hours of operations for most the sites and the tours, which were plentiful. I was lucky to make it to the Liberty Bell Museum before it closed one evening.  I was even luckier to find out (when I was leaving there) about a special open house that evening at Independence Hall.

On Monday the Governor of Pennsylvania addressed the convention and lectured us on why the best Philly Cheese Steaks are made in Philly.  The reason is that other places make three mistakes:  They use good meat, real cheese, and the drain the onions after they are sautéed! He says you want to use the fattest meat available, cheap cheez whiz that melts into the fatty meat and every pore in the bread, and put the onions straight on the sandwich from the grill, grease and all. We were warned that out-of-staters should only eat one per trip.  I'm scheduling mine for Thursday.

[to see convention pictures go to the "Postal & Labor" section]