Discovered September 6, 1883 by Blanche & Orris Heistand who descended into the first room. The following Sunday, Mitch Stewart and friends explored the main passageways.

The next day, local residents descended in mass on the cave. Owner Samuel Stewart, recognizing the commercial potential, secured the entrance and immediately opened the cave to the public. The Marengo Cave Company was formed in 1900 to operate the cave. The cave became popular destination for railroad excursions prior to the great depression.

Local residents used their wagons to haul visitors to and from the train depot. As transportation changed from automobiles, the business languished yet survived on word of mouth advertising. The cave was sold to Floyd Denton in 1995.

Floyd had big plans for redevelopment but died in 1960 before he could realize many of his plans. The cave was sold to a group of avid cave explorers in `973. Designated a National Landmark in1984, the cave business has steadily increased since 1973 to become Indiana's #1 natural attraction. 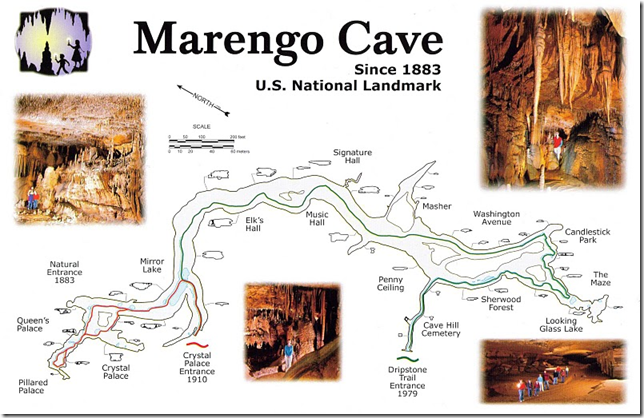